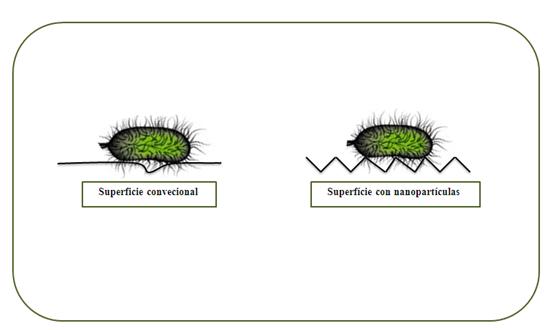 Avoiding contact with bacteria is not only important to prevent disease, but also to keep our bodies healthy, no disease and improve the effectiveness of antibiotics. Currently, pharmaceutical companies are not able to do new antibiotic formula because the human body is becoming more resistant to antibiotics, reducing the ultimate cure of the infection.
Following this line of research, new nanotechnologist antimicrobial applications are emerging. This new aspect of the science is based on small structures made of tiny particles that can evade the adherence of bacteria to surfaces and to guarantee the safety of the population.
According to the International Journal of Nanomedicine, Nanotechnology exploits the extraordinary antibacterial properties of chemical elements such as zinc, copper or silver, reducing its size to lower dimensions. The physical structure antimicrobial nanoparticle’s and they way of interacting and penetrating into the bacteria altering their function makes these particles a unique mechanism of antibacterial fight.
This magazine has published this year an article based on these new materials and the latest findings about their probable applications. It was an experiment testing the capabilities of these materials. First, the researchers observe that when the bacterium E.coli, responsible for gastrointestinal and abdominal discomfort, is exposed to a zinc oxide solution its membrane become irregular and, as a consequence, the bacterium lost its function and viability. Subsequently, they also study the influence of silver on the microbes. They proceeded to immerse these bacteria in a solution composed of silver particles and, after an hour, there was a decrease in their magnification and proliferation. So, it was concluded that both materials had truly bactericidal criteria.
In addition, they tested copper’s effects too. Establishing contact with copper, these bacteria reduced their survival to 90%, which helped to show the effectiveness of this material as a viable tool in preventing the transmission of microorganisms.
The chemical industry is still experimenting and investigating this new field of research. Some of the materials on which they have been focused were silicon, aluminum and titanium; compounds that were already known as possible resources with potential bactericides effects. It is known that some bacteria seem to survive these chemical particles, but they have shown that using the smallest nanoparticles, less than 30nm, the antibacterial effectiveness improve, because they become more capable of penetrating the body of the bacteria, interfering with its membrane and preventing its viability.
In conclusion, due to the importance of preventing illness and maintaining a healthy body, nanotechnology is emerging and it seems to be very effective.