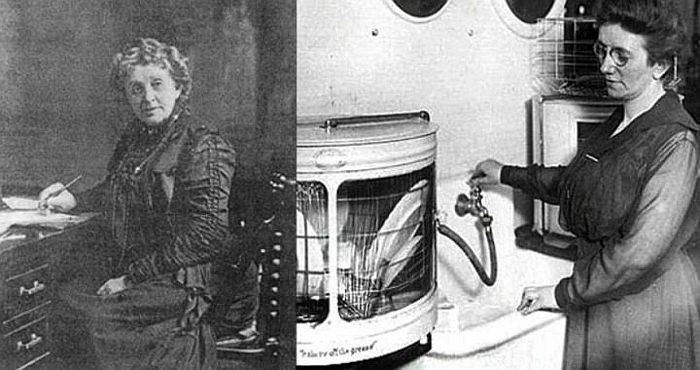 An essential appliance in our kitchens today that ensures the food we store is kept in a good condition. Since the beginning of history, humans have searched for ways to preserve food. So, what’s the history of the fridge? At the beginning of the twentieth century (specifically in 1914), Florence Parpart invented the modern electric fridge. A predecessor of today’s appliance, it brought about a true revolution when it came to conserving and cooking food. Parpart also received a patent for a much improved street-cleaning machine in 1900, which she negotiated and sold to cities throughout the United States.

Thanks to the invention of the dishwasher by the American Josephine Cochrane in the late nineteenth century, the days of washing endless piles of plates by hand came to an end. It was in 1887 that she invented this useful appliance, which is immensely valued by hotels and restaurants.

Cochrane first sold her invention to her friends and advertised it in newspapers as the Cochrane Dishwasher. She founded her own company, the Garis-Cochran Dish-Washing Machine Company, which would later become KitchenAid, as part of the Whirlpool Corporation.

Who doesn’t love the perfect slice of toast for breakfast? From sliced bread, baguettes, and rolls… There’s a type of toast for everybody. What’s more, toasted bread keeps the digestive system active. Sarah Guppy, a British inventor, made it possible for us enjoy toast every day of the week. The ancestor to today’s toaster was a small dish to keep bread warm. She also invented several household appliances, such as a bed with built-in exercise equipment and a device for tea that also cooked eggs in the steam it released. She was also responsible for the design of Britain’s most famous bridge: the Clifton Suspension Bridge (Bristol). And Guppy did all of this before 1852!

What better companion to toast than a good cup of coffee? But, who invented the coffee filter?

Amalie Auguste Melitta Bentz, a German inventor, entrepreneur, and housewife found that percolators fell short when it came to filtering coffee. For this reason, in order to get rid of the bitter taste caused by over-brewing, she invented a mechanism using paper from her son’s school exercise book and a punctured brass pot. The result: coffee free of impurities with a much more pleasant taste.

This utensil, a tool we use every day at mealtimes, has its origin at the end of the 11th century (approximately in the year 1077). We can trace its appearance to the refusal of princess Theodora Anna Doukaina (daughter of Emperor Constantine X Dukas) to touch her food with her fingers.

According to the legend, a contraption made of solid gold named a “fourchette” (skewer) was created and fitted with a pair of spikes. This and other eccentricities led to Theodora being labelled as “scandalous and reprehensible”.

These small actions turned out to be significant contributions in the development and improvement of the quality of life. One small step for these women, a giant leap for society.