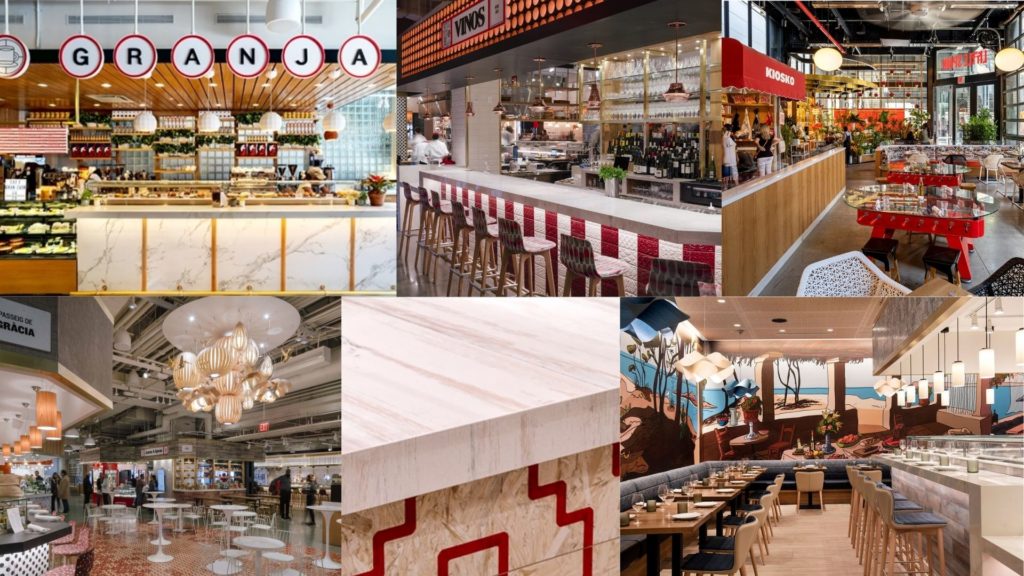 Cosentino City Live hosts a new session of Architecture and Gastronomy Dialogues, in streaming, organized by the Silestone Institute.

Barcelona, April 28. The Silestone Institute brought together chef José Andrés, architect Juli Capella and Santiago Alfonso, vice president of Strategic Communication and Corporate Reputation at Cosentino to discuss the concept and creation of Mercado Little Spain, the gastronomic space dedicated to Spanish cuisine in the heart of Manhattan. The session was moderated by Julia Pérez Lozano, food journalist and founder of Gastroactitud.com.

A piece of Spain to project to the world

With the creation of Mercado Little Spain, the idea was to bring Spain to New York in different ways. Beyond the products, wines and cheeses, in a way, everything you see and touch is Spanish, both the gastronomic and the furniture and design.

José Andrés’ intention with this space was not to make a restaurant but to tell the story of his country. To do so, it was necessary to have this great place in the great city of New York, which is still the American capital par excellence. Together with José Andrés, the brothers Ferrán and Albert Adrià, great friends of the chef, are the soul of Mercado.

Juli Capella has been responsible for the interior design, taking care of all the details of the design and decoration so that everything is 100% Spanish. Cosentino has been very present throughout the space dressing the countertops, bars, and coatings with Dekton and Silestone surfaces.

José Andrés hopes that Mercado will be a place that opens the opportunity not only for many Americans to get to know Spain but also for other chefs to open Spanish restaurants around the world. A way to see that Spain believes in itself and can be taken to every corner of the world by the hand of small and large entrepreneurs, not only in the food industry but also in other types of Spanish industries. As an example, he says: “Gazpacho -a salad turned into soup- is one of our best inventions with which creativity is shared and known in many parts of the world. Let us start working so that gazpacho becomes the next Coca-Cola”.

José Andrés hopes that we all come out of this pandemic stronger and where gastronomy, dish by dish, history by history, design by design… is what begins to give us hope that the world can be much better, one tapa at a time, one plate of food at a time.

A unique space for creativity and design
To carry out the project, different professionals and products were brought in from Spain: architects, designers, tableware, cutlery, surfaces such as Dekton and Silestone for countertops, bars, and coatings, among others.

Juli Capella believes that “New Yorkers and Americans are surprised that in Spain we are so expressive, so daring, so avant-garde… Let us not forget that Spain has certainly led an avant-garde”.

On a creative level, it was key for Juli to understand what atmosphere José Andrés was looking for in Mercado. On a technical point, the project was not without its difficulties in adapting the space to the needs of Spanish cuisine and the 14 different “chiringuitos”. As an example, Juli Capella explained that to make the paellas they were forced to make a chimney different from all the others because it was not possible to mix the smoke from the coal combustion with the smoke from the gas combustion. Other aspects with which they faced were the delimitation of the spaces be between one place and another or the capacity of people.

According to Juli Capella, “Mercado is not something that existed until now, it is not a restaurant, it is not a bar, it is not a market. I think that the charm of this typological invention of José is the element of being an invention of an unprecedented gastronomic typology”.

State-of-the-art materials: must-haves for a restaurant

Santiago Alfonso, vice president of Strategic Communication and Corporate Reputation of Cosentino and general secretary of the Silestone Institute, commented that for Cosentino Mercado Little Spain is one of the best catalogs they can exhibit worldwide. More than 10 different colors of Dekton and Silestone, state-of-the-art surfaces, were used. “For us it is a pride to have been part of this project, as manufacturers of this product category.”

Regarding the combination of factors that must be considered when choosing materials for a restaurant, Santiago Alfonso said, “The functional component is unquestionable. Physically and mechanically, quality is taken for granted, but it must provide a safety component, a plus of hygiene -antibacterial -, very little absorption and no porosity so that no type of bacteria can be deposited. The aesthetic aspect, the color, the texture are extremely important elements”. Undoubtedly, the element of sustainability is gaining a lot of weight”. Therefore, he believes there must be an ethical commitment to humanity and the planet. “Everything related to the circular economy is vital today.” In this line we must highlight Silestone HybriQ, a hybrid concept that citizens understand very well, incorporating recycled materials and a mixture of new minerals reducing silica load, to make a more ecofriendly and safe material will be of great value for architecture and design professionals.

Mercado Little Spain is the gastronomic space of Spanish cuisine created by José Andrés, chef, entrepreneur, and social activist, together with chefs Ferrán and Albert Adrià in New York. The Capella García Arquitectura studio, headed by Juli Capella, has been in charge of the interior design of the project. Cosentino has provided its know-how, experience and state-of-the-art surfaces such as Dekton and Silestone. More than 3,000m2 dedicated to Spanish cuisine in the center of Manhattan.