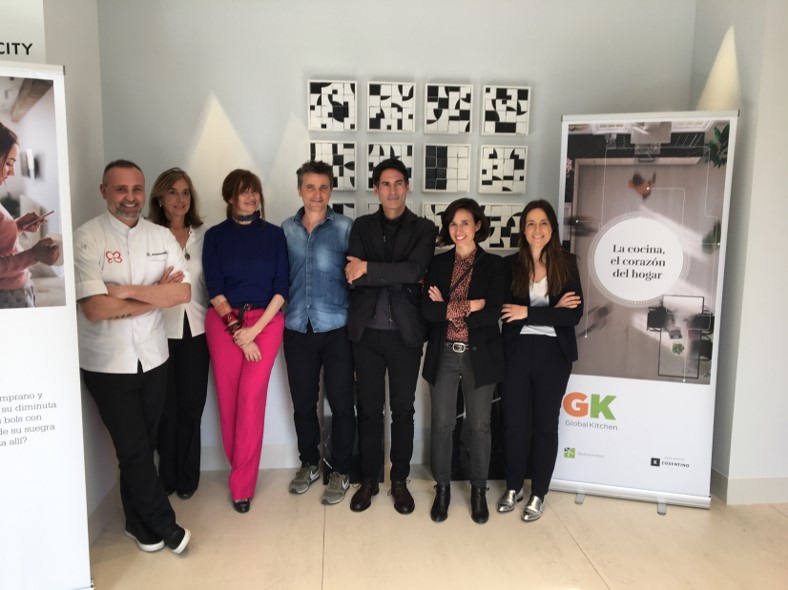 The Silestone Institute presents the report “Global Kitchen: the kitchen, the heart of the home”, a publication that reflects how social changes and the new lifestyles of the 21st century are affecting the design and use of this room. A multifunctional space that regains its position as the vital nucleus of the dwelling and ceases to be basically feminine. It goes from hosting the most traditional activity in the preparation of food to becoming a space to worship health and wellbeing, as well as the care for the environment. Moreover, social media are the real stars in this space as they are the tools to approach the culinary culture and transform consumption habits according to energy efficiency, sustainability or recycling criteria.

According to the opinions of 23 international experts* and to the results of the surveys conducted on citizens in 9 countries**, the kitchen has turned today into a very versatile room. It is the family meeting point during meals–in 43% of the cases-, a center to control our nutrition and health-62% take care of their diet and 31.1% do not resort as often to convenience food- an area of gratification and personal learning when cooking, a space to work or meet guests – 40% of the survey respondents- and a platform to carry out actions to take care of the environment -78% separate waste correctly, reuse more than before and reduce the consumption of energy and water-.

The kitchen: an accurate reflection of social transformations

The social transformations we are currently experiencing, which influence how we are, how we behave and evolve, are also having an impact on the kitchen. These transformations have been driven, among other causes, by the progressive incorporation of women into the labor market, the advances in gender equality and an environment defined by globalization that determines that the kitchen and the consumption habits reflect the patterns of an increasingly connected and interrelated world.

During the presentation chef Rodrigo de la Calle commented that “We must normalize what we understand as healthy life by incorporating small gestures, such as drinking wines without sulphites, recycling … in our day to day”. He has proposed as a measure, the possibility of eating 100% vegetable once a week to help to reduce CO2 emissions. The architects María González and Juanjo López de la Cruz pointed out that “The open kitchen without partitions is a conquest for women and that this space represents the vanguard of housing”. On the other hand, the specialist in food and psychoneuroimmunology, Xevi Verdaguer, believes that “Eating healthy is not only about buying eco products but taking care of other things like the kitchen utensils and materials you use … in any case you have to try to live a life healthy but you should not be obsessed either” and added “The future is that chefs would be trained to make preparations that take into account the diseases or disorders of people. ”

Santiago Alfonso, Vice President of Marketing and Communication of the Cosentino Group explains “The commitment of the Cosentino Group to the kitchen world has led us to become world leaders in the manufacturing of countertops in quartz, granite and ultra-compact surfaces. For this reason we face the challenge of continuing to bring value and innovation to our audiences. Within this framework of action, the Silestone Institute, our research platform on the kitchen space, develops the Global Kitchen project, an initiative to analyze the keys of domestic kitchens in the 21stcentury with the aim of transferring this knowledge to the sector and to society as a whole.”

“Shall we continue in the kitchen?” This sentence is now a part of the everyday life of increasingly more homes, demonstrating the central position of kitchens in all cultures, with consequences in their use and design. Their functionality is the first feature to take into consideration: to accommodate in a safe and practical way the cooking chores –the heat points, smoke extractors are hidden and new technologies are implemented that ensure, for instance, hygiene, heat resistance or durability- along with other activities transferred from other rooms, such as watching TV, checking your tablet…

The kitchen gradually ceases to be an entirely feminine space. Women continue to be responsible for the preparation and organization of meals –doubling the male percentage- although there is a progressive change as a result of the distribution of domestic tasks. However, a balanced distribution is still a pending issue in Mediterranean cultures in comparison with Anglo-Saxon countries.

The link between food and health, fully internalized, also has its reflection in the kitchen. The concern for a healthier lifestyle, both physically and mentally, can be seen in the interest in knowing both the origin and nutritional properties of food. Added to this is the decrease in the consumption of processed or convenience foods.

The environmental awareness has an impact on the use of the kitchen at all levels. On the one hand, it translates into the progressive transformation in purchasing habits and other behaviors: plastic bags and containers are becoming less and less demanded, while bulk supplies and seasonal and local products are gaining importance. And on the other hand, the kitchen becomes the space where the conservation and reuse of food takes place to avoid its waste.

In the kitchen of the 21st century social media are the real stars, leaving behind home automation and smart devices. And they become the excuse to spend more time in it, exploring new dishes or recipes, also turning into a source of information on changes in our diet or the discovery of new restaurants, by means of blogs, Twitter, Facebook, Instagram or tutorials on YouTube. A process in which the leading chefs have played a prescriptive role –they have even relieved women when it comes to transmitting gastronomic traditions, which used to be done by grandmothers, mothers and daughters- sharing their gastronomic expertise with no restrictions through those networks, television programs, books, blogs….. Moreover, social media play another key role, as they are one of the main tools for the transformation of consumption habits based on energy efficiency, sustainability or recycling criteria.

The survey conducted on consumers complements the Global Kitchen Report with its assessment of how they use the kitchen and the lifestyles they develop in this space, in connection with the needs they try to meet when designing it. In this way the kitchen:

64% of women cook regularly compared to 29.9% of men and 6.7% in the case of other members of the family or outsiders such as household employees. A fact to be pointed out in our country is that in 67% of the cases it is the woman who cooks, a slightly higher percentage than in Anglo-Saxon countries.

48.9% have changed their eating habits in the last few years; 62% take more care of their diet since they use social media to check information and 31.1% cook properly using less convenience food. With regard to our situation, 40.74% say they eat less processed food, a figure that is above the average for other countries.